(All images are borrowed from random encounters on the internet. I made none of these. If an image does not come with accurate attribution, and you know the image's original source, let me know so I may hopefully resolve that.)

Before the application of conscious innovation, violence depended mostly on genetics. Size, speed, and strength tended to rule the battlefield, particularly within a given species. Those factors helped allow a combatant to survive, long enough to apply experience to later fights. This iterative trade of early danger for late reduction of danger via experience tended to benefit only the biggest, fastest, and strongest, because the small, slow, and weak typically learned just enough to know why they died.

Conscious innovation changed that. Native intelligence helped learn not only from one's own experience but, less dangerously, from the experience of others. Inspiration to consciously innovate in the moment might produce tactical benefits even without learning from one's own fighting experience, or even the observed experiences of others' fights.

In time, the most intelligent creatures learned to make weapons. Early weapons were initially most beneficial to the most intelligent, as they invented these force multipliers and used them against others who had not yet acquired them. Through sharing, observation, or survival of a fight with someone using a weapon, others could also learn to benefit in the same way. Once a weapon became widespread enough, the strongest held significant advantage again.

For millennia, most (if not all) weapons depended on significant strength for significant advantage in a fight against others who might possess the same weapons, so physical prowess continued to rule the battlefield, even if the margins grew thinner in some cases. Crossbows required strength to prepare for a follow-up shot more quickly than the enemy. Bows with greater range were more useful to the strong, and often unusable by the weak. Swords for pitched battle depended heavily for much of their advantage on strength and size.

Well designed crossbows did tend to even things out a bit, which is why the strong tended to outlaw their availability to the weak, but they were still not capable of truly levelling the playing field if the enemy could have them as well. They could only narrow the margin a little.

Guns eventually (but not initially) dramatically changed the game. The more they advanced, though, the more they allowed for the small, slow, and weak to quickly employ them and quickly follow up on their first shots; thus, the more the game changed, so that eventually nothing but practice stood in the way of most people being able to overcome someone with a bit less dedication, regardless of any difference in physical strength. The invention of the revolver provided an excellent opportunity for those lacking the physical advantage to become a credible threat to even the most physically capable threat, ultimately giving rise to the old saw:

The advantages of the handheld "revolving gun" that we now simply call a "revolver" are small size, light weight, quicker employment than a loaded crossbow or long barrel firearm, and a staggeringly fast (for its time) rate of fire so long as some chambers in the cylinder had not yet been fired. A dainty youngster with some practice could dispatch a huge, athletic, powerful attacker with relative ease. With equal luck, the determining factor was simply the shooter's developed skill. Essentially, only money stood in the way of acquiring the weapon and the practice. Even without practice, a potential victim could be the victor. (Today, even the barrier of financial cost is evaporating, apart from attempts by gun control advocates to make firearm ownership too expensive for the poor.)

A long process of the downtrodden -- minorities, physically unimposing people, and those simply oppressed -- became increasingly dangerous to their predators. The major impediment to that was only the resources of those who had a history of rule before guns really started levelling the playing field, because they could afford more guns, more ammunition for practice, and more minions to carry guns in their names. In short, the greatest impediment to the total liberation of the oppressed in the age of the repeating firearm was the power of a predatory state; all greater limits were rendered obsolete, where such arms were available. 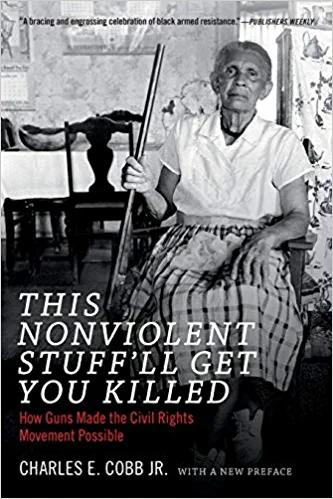 The United States is certainly special in its ratio of guns to people, but widespread prevalence of firearms is not rare. Switzerland arms pretty much all its military eligible citizens, and the most common type of firearm in the world is likely the Russian-designed AK intermediate cartridge rifle pattern, which is not even particularly common, compared to various other gun types, in the US (if only because of decades of anticompetitive import restrictions).

The US is the model for the future of the world, at this point. It was not long ago that one could easily imagine a world in which, eventually, very few firearms would remain in the hands of civilians around the world. A gradually spreading, increasing pressure to disarm civilians gently surged in various places, sometimes retreating before surging again. The last great effort in that regard in the US was the 1990s Biden/Clinton "assault weapon" ban. Other firearms proliferated a bit during that time, though, and it quickly became clear that the Democrats faced a strong headwind politically as long as the AWB remained in force. When that law expired a couple decades before this writing, gun ownership culture growth accelerated and diversified. The popularity of effective arms for a wide variety of defensive purposes in civilian hands grew rapidly. The AR-15 pattern firearms comprise the most obvious exemplar of that class.

Because of common dominance of Democrat politics in minority demographics in the US, it has ironically (and unfortunately) tended to be the case that those who most needed firearms for self defense rejected them. Allegiance to the party of gun control led to the most minority-heavy areas often being the most burdened by gun control. This has been changing as minorities are waking up to the importance of tools of self defense, and the introduction of 3D printing into the gun manufacturing world has helped accelerate that change. A strikingly enthusiastic LGBTQIA+ culture of tactical firearm home manufacturing has exploded into being, and other ethnic and cultural minorities are getting in on the action as well. 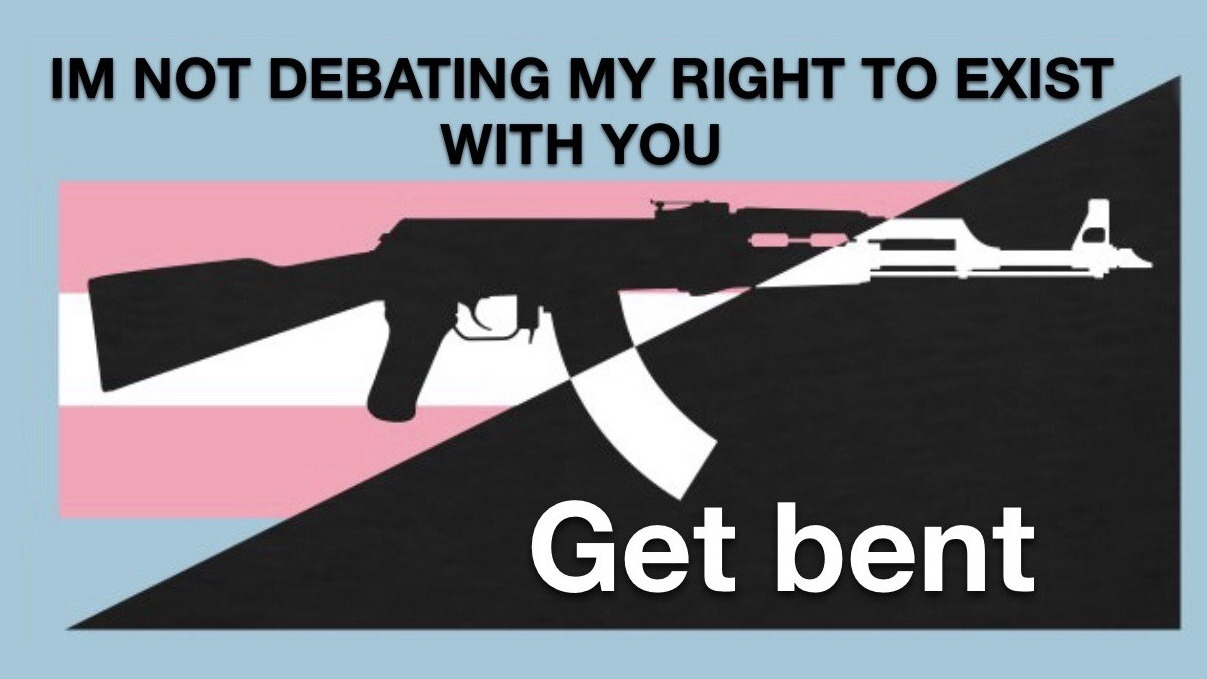 Minorities in the US are finally, thankfully, escaping their political hesitations about gun ownership in ever-larger numbers, in what appears to be a self-sustaining way. With luck, minorities may in time become, collectively, the gun-owning majority. The greatest danger to their existence is being outgunned by agents of an oppressive state and potentially violent bigots. While those bigots are often associated with Republicans, a striking reversal from the nineteenth and early twentieth centuries when it was more commonly the Democrats explicitly using gun control to disarm minorities, I see increasing evidence of not only pro-RKBA (right to keep and bear arms) Democrats, and honest arm-the-minorities Republicans.

Democrats correctly identify the legacy of minority oppression as a factor in high poverty rates among ethnic minorities. They also correctly recognize expensive barriers to practicing many rights as statistically, systemically oppressive to historically downtrodden minorities as a consequence of that poverty. Despite that, it is once again the Democrats who now keep trying to enact laws hindering legal firearm ownership using means such as economic barriers to acquisition and maintenance, and most Democrat voters likely do not recognize how harmful to minorities such policies can be. As a result, these minorities end up continuously more vulnerable to bigots, and to a state that relies on the weakness of citizens for its survival.

Those of us who reject stereotypes and political sacred cows of the dominant false dilemma in US parties welcome growth of gun ownership by demographic minorities, including increasingly large numbers of very non-stereotypical Democrat and Republican voters as well as centrists and radicals. Many, like me, would happily welcome people with historically low gun ownership rates into our culture of self defense, outdoor sports, and technical hobbies associated with firearms. Many, like me, would happily introduce such people to firearms responsibly, so they can enjoy firearms ownership safely.

I appreciate opportunities to help people learn safe and effective use of firearms, and to help them choose their first firearms based on their needs and preferences (rather than my own needs and preferences). My aim is to ensure they enjoy the experience and life a fuller, richer, and less dangerous life, capable of defending themselves from threats to life and limb. I want to be part of the solution to the problems of cultural and political oppression for people subject to discrimination or otherwise vulnerable to predators and oppressors. 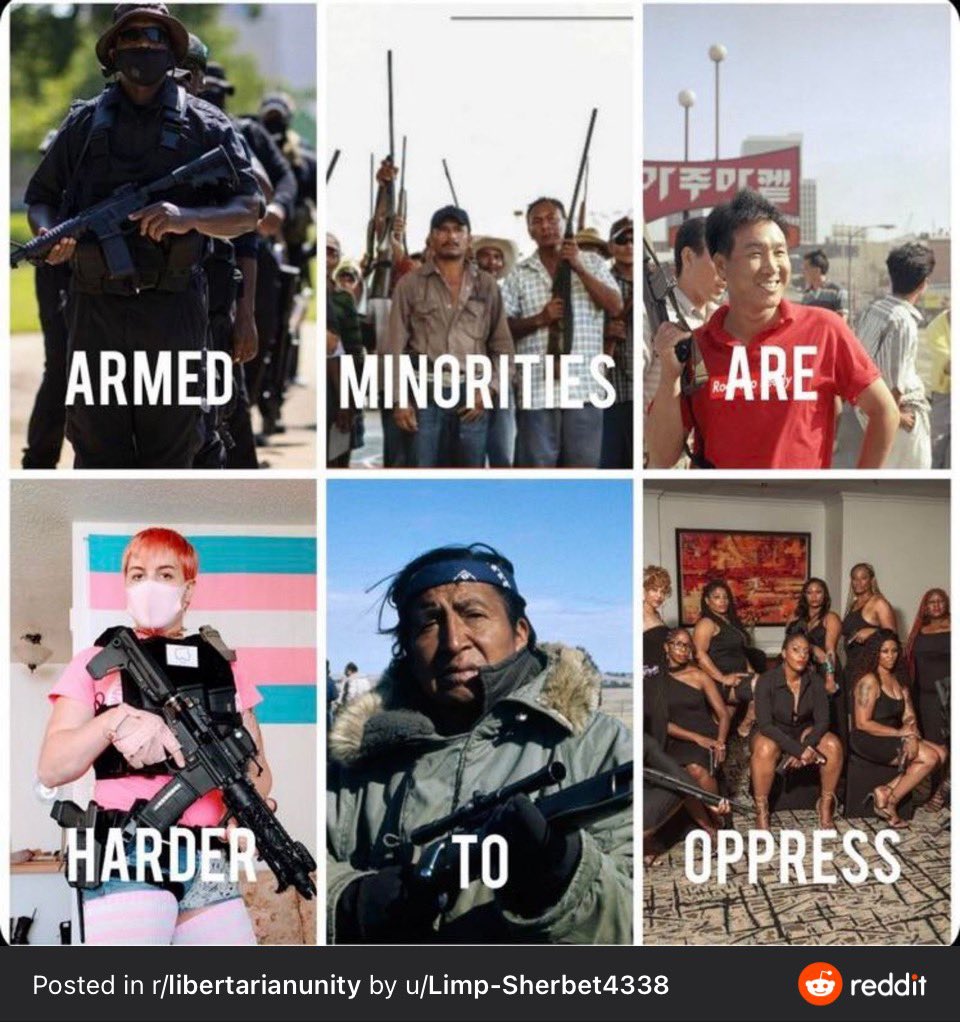 Luckily for my aspirations in this regard, the fastest growing gun owner demographics today seem to be Democrats, minorities, and women.

Just as luckily, the already overwhelming number of civilian owned firearms in the United States is growing at an accelerating pace, and democratizing gun ownership more freely than any formal democratic political system today.

As of this writing, the US government even seems to be aiming, however accidentally, to flood eastern and central Europe with small arms, many of which will likely fall into civilian hands and engender a strong gun owning culture. They just might end up spreading the gospel of guns in the typically civilian gun ownership resistant states of the EU.

On top of all that, the exponentially increasing rate of home firearms manufacturing and innovation is creating a titanic iceberg of gun proliferation in civilian hands, where only the tip above the waterline is visible. With any luck, the historic tendency of states to suppress civilian (and especially minority) access to the means of self defense will run right into that iceberg and sink without much upheaval along the way.

It yet remains to be seen whether the forces of civilian firearm ownership suppression will become aware enough of the inevitability of it to concede defeat before the streets run red with the blood of politicians and armed agents of the state around the world. The genie is out of the bottle, the toothpaste is out of the tube, the floodgates are open, and Pandora's box is wide open. Gun control is doomed, bleeding out of a gaping chest wound, and doesn't even know it yet. The question is how much society at large can avoid the blood that will be spilled by its death throes.

I believe the best way to minimize the harm overall is to get guns into so many trained, responsible civilian hands so quickly that, one night, those who still believe in gun control have no idea how far things have come when they go to bed, then the next morning they will wake up to realize they already lost years before and simply didn't notice.

Join us. Learn about guns, how to handle them safely and effectively, and get one or two for yourself. Reach out to someone like me to help you get started, and direct you to people who are even better equipped to help you. When you're ready, you may even buy a 3D printer or a Ghost Gunner or whatever else you find most appropriate for your preferences to be an active part of this revolution. 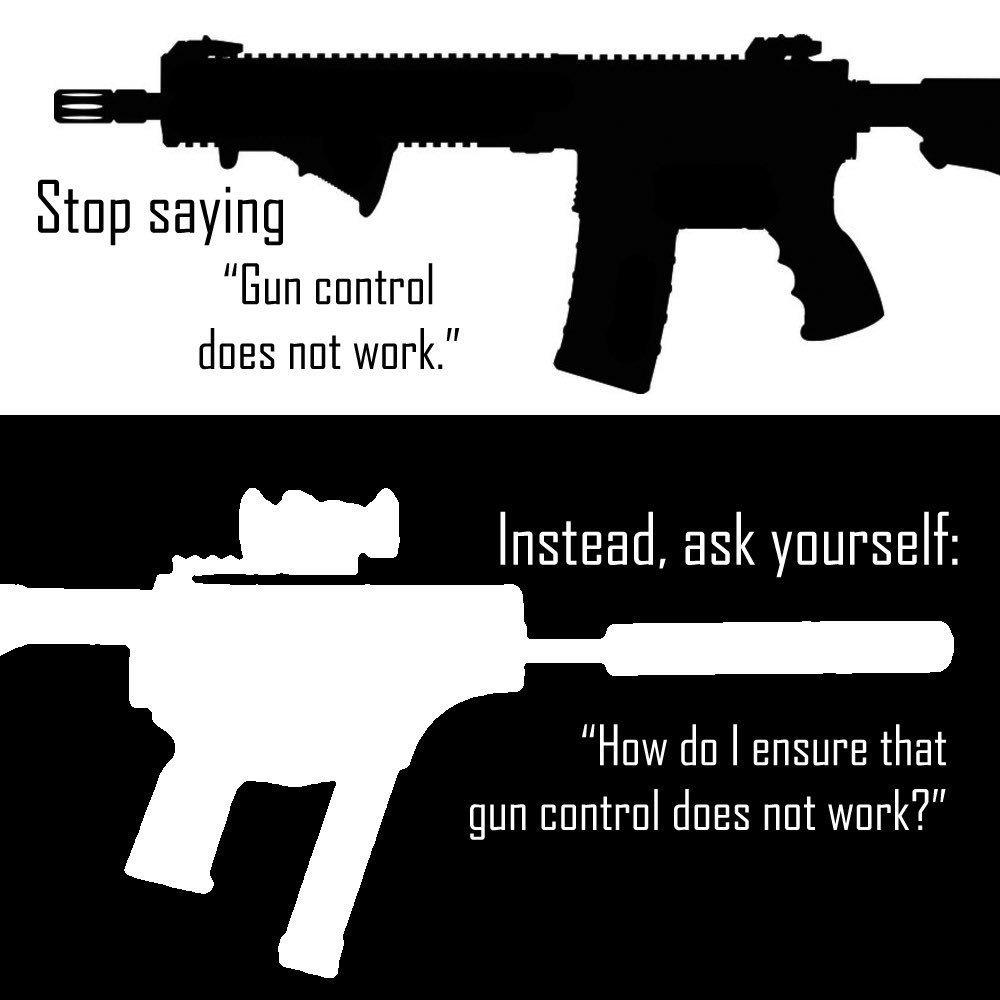